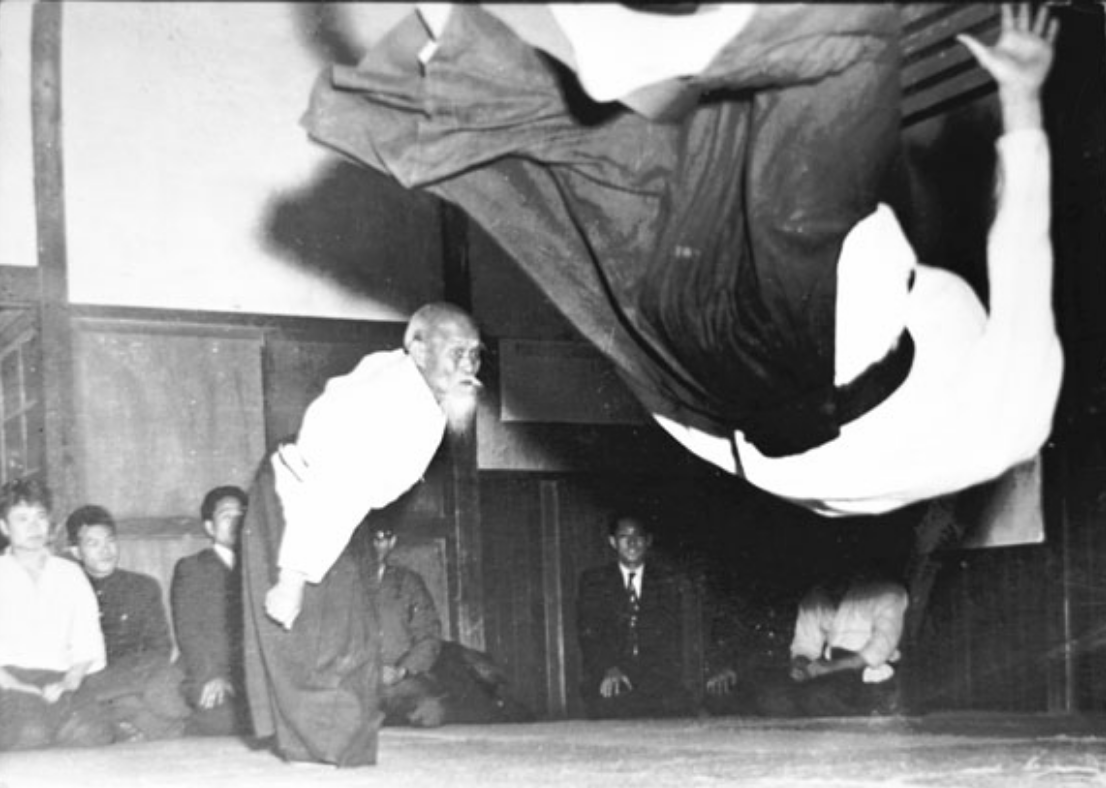 This is a frequent question, but in good aikido habit, let's redirect it into something more positive!

First, let's take a look at what we might mean by the word "real."

If this is what you mean:

Would you practice aikido to go to a fight? Could you beat up an MMA guy?

No, you would practice aikido to understand that going to a fight is a dumb idea all around. If you are choosing to go to a fight, you are already abandoning the whole idea of "harmonizing with the energy of life."

All martial arts have rules, right? In boxing you have gloves, in some forms of karate, certain areas are off-limits to hit. Even in MMA, you can't bring a gun to the ring. If you are looking for techniques to practice that will be practical if you are fighting for your life, you might ask yourself why you think you are going to be in such a fight. If you find the answer to that question sufficient, then you are looking for an art to break or kill the other person first. This is not aikido.

Aikido is real in that it has a real benefit to a practitioner and those they encounter, but to get to that, first we have to understand some terms.

Budo is often translated into English as "Martial Art" (or Martial Arts, if the plural is intended). However, this is not particularly informative, since the Bujutsu are also translated identically.

In order to make the distinction, and there is a real distinction, Budo is therefore often rendered as "Martial Way". This is appropriate since, according to Donn F. Draeger (one of the foremost Western historians of the martial practices of Japan), the distinction between the Bujutsu and the Budo was delineated when the character for Jutsu (art) was replaced by the character for Do (road or way). This helps but it conveys little extra meaning unless one already understands the intention.

We follow Draeger and separate the Budo into two categories:

The classical Budo began to emerge in the Tokugawa period as the culture changed in Japan and the practice of individual combat became less important. While these Budo systems have their roots in the older Bujutsu, the purpose of the Budo arts was not to serve the warrior in combat on the battlefield but rather to be tools to change the practitioner. The aim of the Budo was self-perfection. So while the technical aspects of the art changed, it was believed by the proponents that the arts were evolving to serve a higher purpose. As I'm sure is obvious, the discussion about whether the arts were "evolved" or "diluted" continues to this day!

Therefore, the intent of the Classical Budo was to follow the Do (way) to develop the characteristics of Satori (enlightenment), Fudoshin (immovable mind), and Muga-mushin (no self) within the practitioner. The martial aspects of the practice are related to the vigor and seriousness of the training; combat skills are a side effect rather than the primary focus of the training.

To achieve this purpose, the priorities of Classical Budo practice are:

The modern Budo are the most recent development in the Japanese martial arts and are probably what most people think of when hearing the term "Martial Art." The principle difference between these arts and their elder brethren is the introduction of an element of competition into their training.

This kind of art does not sit well with traditionalists as is illustrated by Dreager when he refers to the "Modern Budo" as an ass in tiger's clothing. Proponents of this development argue that this is the way to include significant elements of stress and reality in ways that are acceptable to our modern society, and so argue that the sporting aspect is an improvement over the traditional ways.

Theoretically, the aims and principles of these modern arts are the same as the Classical Budo.

Most of the "Do" schools one encounters today are of the modern variety, in that they are likely to include some form of competition as a major element of their training. Well known examples include:

Aikido as a Budo

The exact place of Aikido in this taxonomy is open to (endless) debate. The following is our opinion.

Aikido is a Classical Budo

Despite its recent creation, Aikido shows almost all of the characteristics of a Classical Budo:

So, we argue that Aikido (in most of its forms) is a Classical Budo. Some derivatives, particularly Tomiki-ryu as defined by its founder and the Aikido practiced by the International Shin-shin Toitsu Aikido Federation according to Tohei-sensei's directive, are clearly Modern Budo, given their great emphasis on the sporting aspects of the practice.

In order to avoid the ambiguity mentioned earlier, we propose the following translations

The argument about which art fits where is left to the interested reader!

Much of the material on this page has been extracted from the books of Donn F. Dreager. Dreager seems to have a low opinion of Aikido judging by the description in his works so on this one topic we disagree strongly. However the rest of the material is excellent and the books are recommended.

There is probably something in this section that raises strenuous objection amongst almost all practitioners of the martial arts. If you wish to correct any inaccuracies, please send mail. We do not promise to agree with you but we do promise to listen.