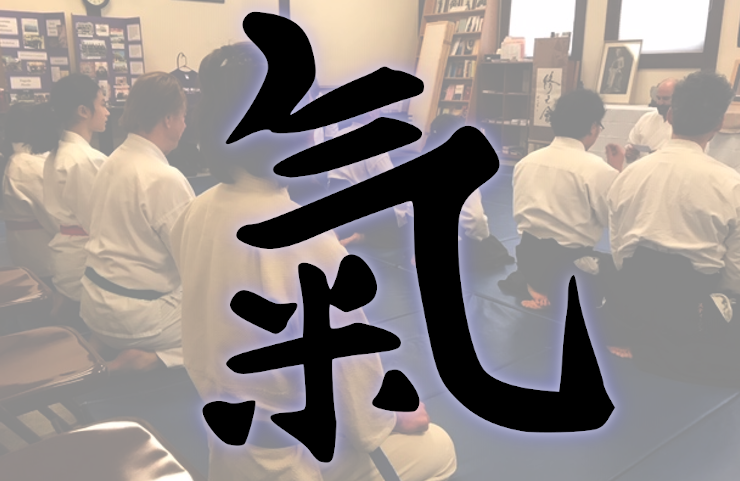 There are many who claim that Aikido is an internal martial art and that internal arts are only meaningful as a concept if one considers the topic of Ki.

Ki is a topic that seems to raise a lot of hackles in a number of circles and discussions around this subject generate more heat than light.

It seems that the positions on what Ki is and means to Aikido range from:

Ki is the meta-physical force that underlies all creation and without Ki I wouldn't be able to lift my spoon to eat my wheaties .. in fact there wouldn't be any wheaties and the reason wheaties are so good for you is that they are almost pure crystallized Universal Ki. If I extend my Ki, it won't rain during my Birthday Party, even if it is April in Seattle. If anyone tries to talk about Aikido without spending months telling you about the universal significance of the mystical Ki, run away since they are obviously clueless about real Aikido. Brutal, Neanderthal Thugs with ...

Ki is a load of crap, invented by the same bunch of con men who go in for spoon bending and UFO sightings. There's no such thing as Ki, all that counts is having 25" biceps and wielding a big stick. If anyone mentions Ki when talking about Aikido, run away since they are obviously clueless about real Aikido. Namby pamby New Age wimps with ..

Given these parodies (at least we hope they are parodies - although we sometimes have doubts!) of the extreme points, then it's not surprising that there is little hope of coming to a rational agreement on the meaning of Ki.

Still, it's always fun to try.

The term Ki is very commonly used in the Japanese setting. It occurs in all kinds of every day expressions (e.g. genki - good health), and so it doesn't carry the same kind of esoteric implications that it often does for Western people. In just the same way as we can talk about a person having a "good heart" without necessarily believing that "goodness" is in any way related to the muscle that pumps blood, so too can a Japanese person use Ki in all sorts of expressions and contexts without necessarily adopting any particular philosophical position on the existence of a specific energy.

Ki is not a native part of our culture and so we tend to look upon the terminology with a quite different perspective.

There is a natural tendency to want everything to be expressed in terms and situations that are comfortable within our own model of the world and for much of Aikido, this is quite different to the model of the founder. This tends to lead to people dividing into various camps.

It seems unfortunately true that most of the demonstrations one sees associated with the term "Ki" involve all sorts of tricks and stunts that are more properly in the realm of the stage magician (and often using the same mechanisms) than in the realm of the martial artist. This, in our opinion, is unfortunate since it almost guarantees that there is no possibility of serious study on the issue: if you see 10 people claiming to do something and you observe that 9 of them lying or cheating, you are unlikely to look at the 10th and assume that there is anything else to be seen. This has lead to a very negative association with the term in some minds.

Countering this belief is the overwhelming desire of some to find a magical way of getting "something for nothing" and so embracing the idea of Ki as a magical force that will make their Aikido work without the trouble and bother of ever having to work to learn anything.

The Ki Believer and the Ki Agnostic

Then finally, we reach those groups for whom there is some hope of reasonable exploration with a view to getting some value out of the concept of Ki.

It is this audience that we hope will find something of interest herein.

A Pragmatic Approach to Ki

We hold that there is some value to the concept of Ki within Aikido training and claim that we can demonstrate this value to anyone in one of the reasonable categories above. We believe that there are two viewpoints, that allow the maximum benefit in training, that one can adopt, depending on individual sensibilities:

Ki is an as yet not well understood energy generated within the human bio-system. It has specific and reproducible properties that are very significant with respect to certain physical practices. Through training in specific ways, this energy can be developed, controlled and used. This energy has practical application to both Aikido practice and health. Eventually, our Western world view will be rationally extended to include these concepts just as it was extended to embrace blood circulation, electricity and quantum physics.

Ki is a term used to describe a particular synergy of various psychological and physical effects within the human body. It has no real existence as a separate force but is a useful conceptual metaphor, providing a simplified model for training these effects. Through training in specific ways, that are consistently defined by this model, we can develop, control and enhance these effects. These effects, and the mind/body states underlying them, are useful in practice and beneficial to the practitioner's health. Eventually, we will have a complete understanding of the precise mechanisms of the mind and body that cause these effects and there will be no mystery.

The bottom line of our thesis is that it is useful to practice the exercises and use the "model" of Ki training from a pragmatic perspective, and the exact "truth" of Ki is not necessary for getting benefit. How far you can extend this practice is a matter of personal choice.

How is Ki used?

It seems that Ki is manifested within Aikido in some specific ways. These include:

It seems that these effects can be broken down an explained using two concepts:

By this, we are referring to a relaxed and "open" body, which allows connections to be made through the whole body and often to the ground with a minimum use of tension and strain.

Most of the effects of increased stability and power have some component of this aspect, since, in general, the power is dissipated through a larger mass due to the open connection. For example, the relaxed and properly aligned body distributes the force through the ground in the various pushing tests. In the case of the unbendable arm, the force is dissipated through the large muscles of the back and not just the arm.

If the practitioner is relaxed, then a constant connection to the center can be maintained and the "whole body" power is easily used.

This aspect also has a noticeable health benefit since the connectivity requires a release of stress and tension, allowing better circulation of the blood, better breathing rhythms and so forth.

By this, we refer to the effect of strongly focusing the mind. This is perhaps less easy to grasp than the previous aspect, since it is not so easy to be concrete when discussing mental concepts. For example, everyone accepts the idea of "Will" and the fact that it can clearly effect physical behavior but yet it has no "form" and cannot be measured in any direct way. It is clearly accepted by most people that mental concepts can effect the physical body (e.g. the placebo effect in medicine). We do not believe that this aspect of Ki is any less important than the rule of body, since as humans we clearly depend on the inter-working of our mind and body for all aspects of our existence.

So without needing to wander into realms of esoteric philosophy, we claim that it is clear that Ki cannot just be regarded as a purely physical phenomenon but must, at least, be considered from a psycho-physical perspective.

Since this "focus of intent" is perceptible by others (whether directly or via interpretation of subtle clues depends on your beliefs), this intent can cause effects in others, as well as in yourself. For example, if an uke perceives the intent in a technique before the contact, they sometimes react to this as if it were the physical force, resulting in a no touch throw. Many times, the intent of a person pushing can be diminished and the power they believe they are exerting in a test is actually much less in reality, leaving the person being tested undisturbed. This effect has an influence on many of the effects we traditionally ascribe to Ki and claim are impossible in physical terms.

The combination and synergy of these two aspects is sufficient to describe all of the effects one normally associates with Ki within an Aikido context - and it still allows the choice of interpretation of:

Ki is the energy generated by intent in a connected body