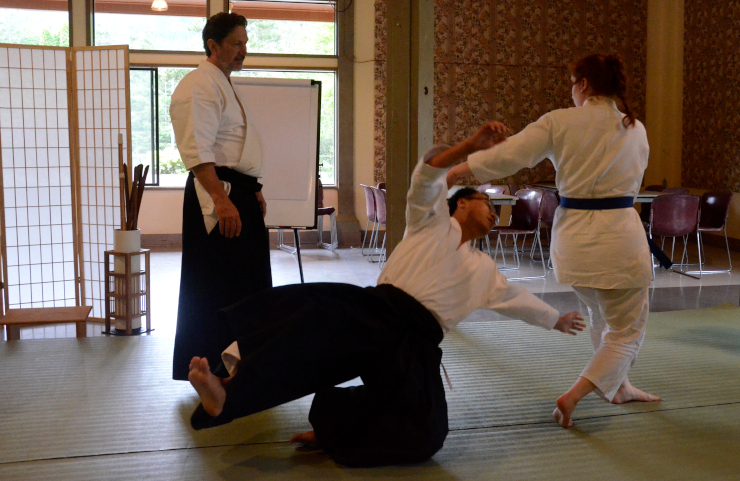 Grading is an opportunity to show to yourself (and anyone else able to see) that you can discern, do and accept the result of doing the right thing and to grow by doing so" - Jones-sensei

Throughout our lives, we are tested, measured, and evaluated. We are compared to our peers, our predecessors, our successors, our siblings, our parents, our children, and even sometimes to a former version of ourselves (try going to a class reunion and see if this isn't so). Most people that come into our organization are brought up with this kind of conditioning and mindset.

In our Shugenkai world, for adults we have seven kyu grades (7th through 1st) and three teaching levels (instructor, senior instructor, and chief instructor) which serve as indications of various stages of our Aikido development. We start practice as beginners, and as we develop, the belt we close our dogi with changes colors from white, to yellow, to green, to blue, to brown, and finally to black, at which time we also start wearing a hakama. This system is useful for several reasons. When someone new comes into the dojo, and they don't know which is their right hand or which part of the dogi goes on top and which goes on the bottom, they can take advantage of the visual clues around them to see who might be able to help them. "That person over there is wearing a green belt, I bet he knows the difference between the pants and the jacket, I'll go ask him." (Let's hope they get the right answer :~) ). The color belt we're wearing also tends to change what we expect from ourselves. It changes the amount of responsibility we're expected to take on in the dojo. It changes what people expect of us on the mat.

Loosely speaking, to transition from one colored belt to a different colored belt, we have the grading process. Normally the only time someone changes the color of the belt they wear to practice is when a grading occurs. Now, a grading is meant to be something special, and it serves several purposes, both for the student and also for the teacher.

The student gets a whole practice dedicated just to him or her as an individual. They get to try to demonstrate for the teacher and for the rest of the dojo where their practice is currently at. They get to discover new things about themselves as they deal with a high pressure situation in which they are in the spotlight, and flaws that otherwise would remain hidden become painfully obvious in that harsh light. For the student, a grading can be a real turning point in their practice. In many ways it's like the fire which you would bake a ceramic piece in. It often is the culmination of one phase of a person's practice, and always signals the arrival of new challenges. It really is a special thing.

Unfortunately, too often we go into gradings with entirely the wrong mindset. We cannot separate this wonderful opportunity for exploration, self discovery, and growth from the tests and evaluations that are so much a part of our culture and are so deeply embedded in our consciousness. We try to view the grading as a test. If it is a test, then there are right and wrong answers. If it is a test, then there is a level of performance that denotes passing, and if I perform below that level, that means I've failed. To the uneducated mind, a grading looks and feels so much like one more performance evaluation that it is nearly impossible not to think this way. And the only conclusion that this thought process can lead to is that at the end of this test, I will be told whether or not I performed well enough to pass this test. At no time, of course, does any teacher say to a student at the end of a grading, "You've passed," or "You've failed." And this just does not compute. "I just took a test, isn't someone going to tell me if I've passed or not?"

At the end of each grading, the teacher lets each person know what phase of their development he feels they are in, and therefore what color belt they should wear. This is the only thing that even remotely resembles someone saying "Pass" or "Fail", so it is almost universally viewed as such by any person who's ever graded. I took a test, I get to wear a new belt, I passed. I took a test, I have to wear the same belt, I failed. But this couldn't be further from the truth.

It is incredibly unfortunate that we are so conditioned to being tested, so conditioned to the fear of failing a test, that we cannot distinguish between what a grading is really about and, say, our latest performance review or the last Algebra test we took. We are bound and determined to make this grading experience fit into the mold of what we know, so we turn it into something it's not, and in so doing we often completely miss the whole point. We end up focusing on passing the test, rather than focusing on just letting the teacher see where we are at in our practice.

We have a list of skills that one is expected to perform during a grading. We call these sets of skills "Aikido criteria for grading." These are not criteria for advancement. What is required to advance is growth as an Aikido practitioner, in all aspects of one's practice. This may include all the skills in a particular list, but that set of skills does not by itself represent the sum total of one's practice. So being able to do every skill on a particular list does not necessarily mean that a student is entering a different phase of his practice. Then why have these criteria?

The "criteria for grading" are a set of skills whose primary purpose is to allow the examiner to view several different aspects of a student's Aikido practice during the course of a grading. They are not criteria for advancement. They act as a window through which the examiner can look in order to make a determination about where a person is in his or her practice. If you look at a painting through a window, the window is not the painting, but the window can affect how you see the painting. In the same way, the grading criteria are not the sum total of a person's Aikido practice, but they are the means by which the teacher looks at the sum total of a person's Aikido practice.

People get confused - "I did everything on the sheet just right, why didn't I advance?" It's because the examiner looked through the wonderfully clean window you gave him to look through, and saw that you as an Aikidoka would benefit most from practicing a little longer right where you're at. "But that other person screwed everything up! Why is she advancing?" It's because despite having some dirt on the window, the teacher was still able to see enough to make that determination. Being prepared for a grading doesn't change who you are or how much you've grown as an Aikido practitioner. Growth in Aikido is more than just learning how to do five more techniques and one more weapons sequence. It's a matter of embracing the fundamental truths and principles that we all are striving for. It's a matter of putting in your time. It's a matter of practicing the right things for a long enough time that change, real change, happens deep down.

So somehow we have to get this. We have to embrace, understand, accept, and digest the fact that a grading has nothing whatsoever to do with passing a test or not, being given a stamp of approval or not, being validated or not. It has nothing whatsoever to do with any of that. As a student, your job is to know the criteria and prepare yourself well, realizing that you are who you are, and you are where you're at, and a few weeks of practicing a list of techniques and taigis are not going to change those things all that much. You prepare yourself as much as possible, then you go into the grading and do your best, but not because you want to "Pass" to the next rank, or because you'll be embarrassed if you "Fail" and stay at the rank you're at. You prepare yourself, you perform as well as you can during the grading, and then you accept yourself for who you are and for where your practice is. In so doing, you will gain a tremendous amount of benefit from the experience. You will find things out about yourself. And you will come away with questions. The teacher may tell you that you should wear a different belt to practice, or he may not. If you trust him as a teacher, accept it and move on. Too many times people come away saying, "I screwed up on nikkyo - I don't deserve to advance." You've missed the point entirely if this is you. Or they say, "I screwed up on nikkyo - that's why I didn't advance." You've missed the point entirely if this is you.

Gradings are extremely valuable opportunities, and there really aren't that many of them, if you think about it. Don't waste a wonderful opportunity by trying to make a grading something it's not. It's not enough to nod your head in agreement when the teacher explains this every time someone grades. As in other areas of our practice, it requires a conscious effort of will and openness of mind to really get this.

Changing a deeply embedded mindset is never easy or comfortable, but it can be done.